It is time to sing again 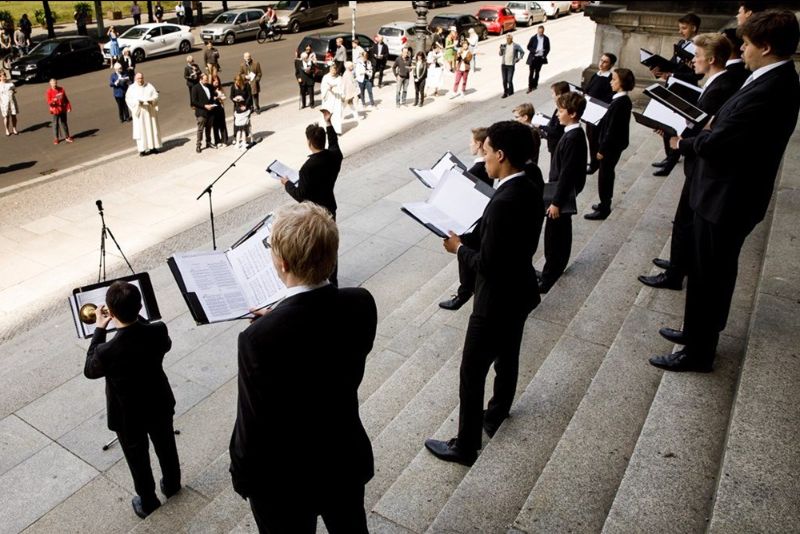 The Following article by Ed Ballard first appeared in the Church Times on June 5th, 2020. You can access the full article [here] THE rows of chairs were set out. The fridge was stocked with milk. Tuesday’s choir practice would be like any other. Except that it wouldn’t. Because, on 8 March, Washington State’s Skagit Valley Chorale’s rehearsal would lead to a tragedy — one that would come to resonate across the musical world.

Within days, 53 of the 61 members of the choir singing that day were unwell. Three were soon in hospital. Two later died. When an article appeared in the Los Angeles Times, “Choir practice turns fatal. Coronavirus is to blame”, many started to ask: was the singing to blame?

It all seemed so logical. Sending great streams of air out into a room, like coughing or sneezing, only more sustained, and with consonants: what could possibly be more dangerous? Then, news broke of a further outbreak in the Amsterdam Mixed Choir. Then another in Berlin Cathedral. It seemed to confirm everyone’s worst fears. The choirs must be silenced.

AND so they have been. Since early March, there has barely been a chord, cadence, or quaver in Europe or North America. A gloom has settled over a profession and pastime that had previously brought such joy and inspiration, and solace to so many.

And yet as countries start cautiously to emerge from their national lockdowns, as restrictions start to ease, and tentative steps begin towards resuming work, this cloud over singing remains. The fear has taken hold. Pessimism reigns. Some are even asking, will we ever be able to sing together again?

The answer, in short, should be “Yes.” In changed circumstances, certainly; perhaps even in wholly new and unrecognisable ways. But, on current evidence, the singing itself does not seem to be the issue. What has happened, in the midst of the tragedy and uncertainty of recent weeks, is a classic case of correlation being mistaken for causation; of hastily drawn opinions becoming established fact; of an industry being silenced on a false premise.

Take a moment to examine the evidence. Yes, the Skagit Valley, Amsterdam, and Berlin incidents all had singing in common. But they also had another thing in common: large numbers of people indoors in close proximity — exactly the thing that we have all been told we must avoid.

The Skagit Valley Chorale rehearsed “sitting 6-10 inches from one another”, according to the recent Centers for Disease Control and Prevention report into the incident. The 78 members of the Berlin Cathedral Choir rehearsed in a 120-metre-square room: far too small for effective social distancing to be observed. And, as one member of the Amsterdam Mixed Choir observed: “Maybe we were too naïve together. . . But that wasn’t an issue at the time, the danger of the coronavirus.” It was business as usual.

Then there is the scientific evidence around singing. Early in the crisis, many concerned arts organisations turned to doctors and academics for advice, especially in the liability conscious United States. Pressed to give an opinion, these experts gave just that: an opinion; a best estimate in the absence of specific research. One early set of guidelines from a university in Freiburg, which has had particular influence in the UK, advised that all singing should be suspended until further notice.

This soon became gospel. And, despite the fact that Freiburg has since withdrawn the guidelines and released new advice that singing can be safe, provided social distancing is in place, the old guidelines are still being shared.

Singing may, indeed, produce aerosol particles. But, according to the World Health Organization (WHO), Covid-19 is not an airborne virus. “In an analysis of 75,465 Covid-19 cases in China”, one of its scientific briefs states, “airborne transmission was not reported.” “There is no evidence of transmission of the virus as an airborne pathogen,” the WHO’s technical lead on infection prevention and control, Dr Benedetta Allegranzi, has said, despite theories based on lab simulations. Droplet and contact transmission remains the WHO’s official position, as it does of Public Health England.

The idea that singing leads to a vastly increased projection of either droplets or aerosols has also been called into question. A recent study by the Institute of Fluid Mechanics and Aerodynamics, in Munich, looked specifically at the disturbance of air caused by singing and wind instruments. The study found that it was “only set in motion in the immediate vicinity of the mouth when singing”. The experiments that they carried out showed that “at a distance of around 0.5 m, almost no air movement can be detected, regardless of how loud the sound was and what pitch was sung”.

Studies commissioned by the Vienna Philharmonic and the Bamberg Symphony Orchestra reached the same conclusion for orchestral players. All the studies stress the importance of social distancing. But the singing, or playing, itself was not the problem.

Professional choirs in Europe have been quick to adapt. Opera companies have begun announcing full autumn seasons, and concerts and recitals, behind closed doors, are already taking place, even in London. Clearly, there is already scope for voices to be lifted in song.

SO, WHAT is possible and what remains a risk? Clearly, there is no one-size-fits-all solution. But we must move beyond the hysteria around singing to find a calmer and more considered approach that examines each case on its own merits.

This sounds mundane and bureaucratic, but it is not. It is a path back to singing. And, for those whose livelihoods depend on singing, from choirs to concert halls, cathedrals to opera houses, it is a means of survival in a sector that is facing financial ruin.

For now, our voices cannot meet as they once did. Lessons from those fateful rehearsals in Washington County, Berlin, and Amsterdam must be learned. But they need to be the right lessons. And something precious to all those involved should not be lost.

We'd love to stay in touch